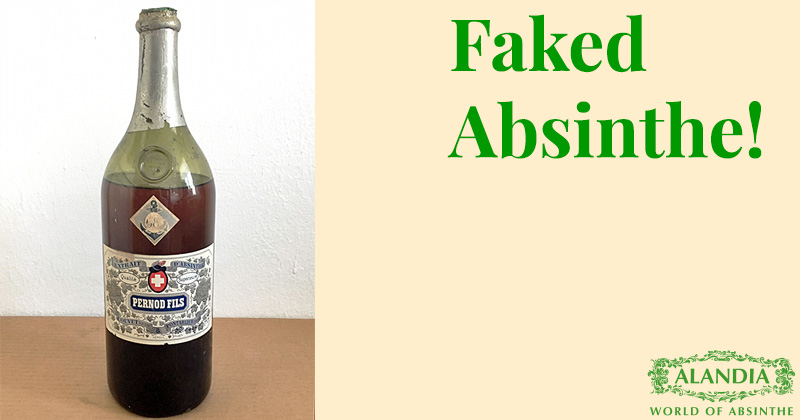 Real Absinthe from the time before the ban

Absinthe is a spirit with a long and fascinating history. To understand the desirability of an original Preban Absinthe, we would like to start with a brief history of Absinthe.

The name “Absinthe” derives from the Latin word “Absinthium” and means wormwood, the characteristic ingredient of the high-proof spirit. Furthermore, the basic ingredients of an original Absinthe are green anise and fennel. Depending on the recipe, other additional herbs are used as well. An original Absinthe is naturally coloured with herbs and has therefore a typically green colour, which is why Absinthe is also known as the “Green Fairy” (La Fée Verte).

In 1769 the first known advertisement for a wormwood-based elixir called “Bon Extrait d’Absinthe” appeared in a Neuchâtel newspaper (Switzerland). In 1792, Dr. Ordinaire developed a revised recipe consisting of 8 plants. Among them were wormwood, anise, hyssop and fennel, combined with 68 percent alcohol by vol. The recipe was sold in 1797 to the French Major Dubied, who together with his son and son-in-law (H.L. Pernod) built the first Absinthe factory in Switzerland (Couvet) and marketed Absinthe as a stimulant in contrast to a purely medicinal use.

Absinthe in the 19th century

During the war of conquest in Algeria in 1830, the French army used the disinfectant effect of Absinthe. The alcohol rations were primarily used to disinfect the contaminated water. But especially because of the intoxicating side effects and of course the excellent taste, Absinthe was loved by the troops. After their return home, they did not want to do without the beloved glass of Absinthe, so that nothing stood in the way of the triumphal march of Absinthe for the time being. Drinking Absinthe became more and more an expression of time and was accepted in all strata of society.

Many great works of art owe their existence to the secret of the “Green Fairy”. Great names such as Baudelaire, Manet, Verlaine, Rimbaud, Oscar Wilde, Degas, Toulouse-Lautrec, van Gogh, Gauguin and Picasso can be found among these early passionate Absinthe followers. However, this fame should soon be over again…

The Absinthe ban and its consequences

Switzerland was the first country to ban Absinthe in 1910. This was partly due to the high alcohol consumption in society. On the other hand the pressure of the French wine lobby increased, which feared the competition of the new drink and consciously stood up for a ban of the Green Fairy. The argument was based on the allegedly toxic effect of Absinthe, which was attributed to the active ingredient thujone contained in wormwood. 1915 France follows with its Absinthe ban and in the following years the drink is banned in almost all countries of the world. The time of original Preban Absinthe is over…

After the ban Pernod Fils, the biggest producer of Absinthe to that date, moved a production plant to Tarragona in Spain. Spain was and still is one of the only countries where Absinthe was never banned. So it was possible to produce original Absinthe even after the worldwide ban (with slightly changed recipe). However, the reputation of the product had fallen into such disrepute due to the negative reporting that sales remained at a very low level. At the beginning of the 1970s, production of Tarragona Absinthe was finally discontinued due to dwindling demand.

The drink “Absinthe” was almost forgotten but experienced an upswing in 1998 by a changed EU-legislation, which allowed once again the consumption and legal sale of the Green Fairy. Part of the fascination of Absinthe are its stories and the myth that vintage Absinthe (preban) possessed vast amounts of thujone and therefore caused hallucinations. This hallucinating effect of Absinthe is humbug, but it is persistent and can explain part of the fascination of the drink. Nevertheless genuine Preban Absinthe is considered by connoisseurs to be the epitome of Absinthe enjoyment due to its original recipe and centuries of maturation.

Counterfeit Absinthe: The work of criminals

Real Absinthe from the time before the Absinthe ban is extremely rare. Original bottles exist from cellar finds or liquidations of wine cellars of old hotels. The prices vary depending upon condition of the bottle and mark from
$ 3000 – 5000. Especially coveted are original Pernod Fils Absinthe, the market leader at the turn of the century. Since Pernod Fils Absinthe was produced in large quantities, empty bottles are still relatively easy to find at flea markets and internet auction houses. This circumstance is used by counterfeiters, which we would like to point out in the following.

In concrete terms, this means that the aluminium foil of the bottle neck does not continue under the wax seal in the area of the cork. This is the case with unopened bottles. The fact that the foil is missing here is therefore a clear sign that the bottle has already been opened. The wax seal has also been re-applied. It appears optically old, but this is only the case because it was rubbed with dirt (probably ash) on the surface to simulate aging. One recognizes a bright green at the edges, which would be darkened with a historical bottle. The wax seal clearly shows several layers, i.e. the counterfeiter was careless and did not take the extra mile to completely remove the originally applied wax. This is also a forgery hint.

Authentic or not? Provenance of the bottle

In addition to the obvious indications of counterfeiting shown above, the origin of the bottle also indicates a counterfeit. The bottle to be examined was sold at an auction on ebay.fr on 26 January 2019. As you can see on the auction photo, the bottle was empty at the time of the auction

A little later the bottle was offered for sale by a fraud from London (Simon) known in the Absinthe community. You can see the same characteristics when comparing the bottles. It can be assumed without a doubt that the bottle is not a historical Pernod Fils Absinthe. The bottle was subsequently filled by the counterfeiter. It is clearly a counterfeit.

There is no question that owning genuine Preban Absinthe is still the crowning glory of an Absinthe collection. But you have to be careful when buying. Especially the wax seal and the aluminium foil underneath are a good indication for the authenticity of the Absinthe. However this can also be faked as explained in the described case. Unnatural signs of aging such as rubbing with ash/soil can be a further indicator for a counterfeit. Sometimes other features can prove a counterfeit. For example, the bottle in question does not match the original used bottle (photographies of original old bottles can help). Or the wax seal typical for old Absinthe bottles is missing completely, and / or a too new looking cork closes the bottle.

Altogether one should buy Preban Absinthe with caution, be skeptical if a “bargain” looks too good to be true…

Green Greetings from the World of Absinthe,