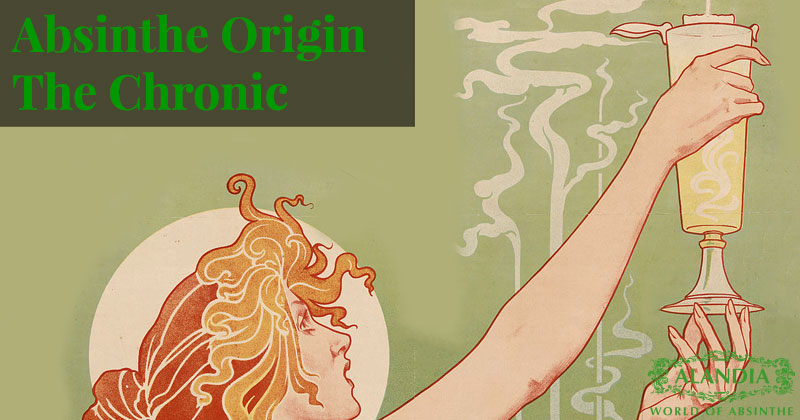 What is Absinthe? The Basics

The name “Absinthe” comes from the Latin word “Absinthium” and means wormwood. Wormwood is the characteristic ingredient of the high-percentage spirit. Furthermore, the basic ingredients of an original Absinthe are green anise and fennel. Depending on the recipe, other herbs are used. After distillation authentic Absinthe is naturally coloured with herbs. Therefore the spirit is typically green in colour, which is why it is also known as “the Green Fairy” (La Fée Verte).

1792 Dr. Ordinaire, the inventor of the “modern” Absinthe, develops a recipe consisting of 8 plants. Among them were wormwood, anise, hyssop and fennel, combined with 68 percent alcohol by volume, which became the traditional alcohol content for real Absinthe.

1797 The recipe is sold to the French Major Dubied, who together with his son and son-in-law (H.L. Pernod) builds the first Absinthe factory in Switzerland (Couvet). They start to market Absinthe as a stimulant in contrast to a purely medicinal use.

Origins of Absinthe: The times of fame!

1844 – 1847 During the war of conquest in Algeria in 1830, the French army uses the disinfectant effect of Absinthe. The alcohol rations were primarily used to disinfect the contaminated water. But especially because of the intoxicating side effects and of course the excellent taste, Absinthe was loved by the troops. After their return home, they did not want to miss their beloved glass of Absinthe, so that nothing stood in the way of the triumphal march of Absinthe for the time being.

Origins of Absinthe: The Ban

1910 Switzerland is the first country to ban Absinthe. On the one hand this is due to the high alcohol consumption in the society, on the other hand the pressure of the French wine lobby rose, who feared the competition of the new drink and consciously stood up for a ban of the Green Fairy. The argument was based on the allegedly toxic effect of Absinthe, which was attributed to the active ingredient thujone contained in wormwood.

1923 Germany prohibits not only the sale of the beverage, but also the distribution of the recipe.

The end of the Green Fairy: Until 1920, most European countries prohibited the use and sale of Absinthe, with the exception of Spain, Portugal and England. The manufacturer Pernod Fils exploits the legal loophole and produces Absinthe in Tarragona, Spain, until the 1970s. However, the drink is more and more forgotten and is replaced by the “Pastis”, an Absinthe without wormwood (“pastiche” french for “imitation”).

The revival of the Green Fairy

1981 Germany lifts the Absinthe ban, but the use of wormwood oil/thujone in food is still prohibited, which in fact continues to ban the drink.

1991 Recent researches agree that the toxic effect of thujone is practically ineffective in Absinthe, which has a very low incidence. The European Union changes the legal limit for thujone in spirits with an alcohol content of up to 25%, set at 5 mg/kg. In addition, 10 mg/kg apply to spirits with up to 25% and 35 mg/kg to bitter spirits. Genuine Absinthe can now be legally offered again!

2001 Hollywood shoots the film Moulin Rouge with Kylie Minogue as the “Green Fairy”.

The rebirth of the Green Fairy: Through films such as Moulin Rouge or From Hell with Johnny Depp, the cult of the drink experiences a true revival and lets the world immerse itself again in the euphoria of the 19th century.

2007 The United States legalizes Absinthe, but with different limits compared to the EU. Only 10mg/kg thujone are allowed.

2008 The Journal of Agricultural and Food Chemistry publishes an article with the latest scientific research on the thujone content of historical absinthe. The analyses show that vintage Absinthes did not possess more thujone than today’s varieties (maximum 35mg/kg).

2017 In the course of the Craft Spirits movement Absinthe also experiences a further upswing. The Green Fairy is back more than ever!

Absinthe: There is much more to discover!

We hope you enjoyed this article about the origins of Absinthe. If you are interested, you will find many more articles about the history of Absinthe in our blog. If you would like to try Absinthe after all this information, we are looking forward to your visit in our Absinthe Online Store. There we offer an exclusive selection of original Absinthe for sale.

Green greetings from the world of Absinthe,

We have compiled the above data on the origin of Absinthe as an Absinthe infographic. You are welcome to share the infographic via your favorite social network, add it to your website or reuse it elsewhere. In this case we only ask you to quote the original source in the following format:

1 thought on “Absinthe Origin: The chronic of the Green Fairy”