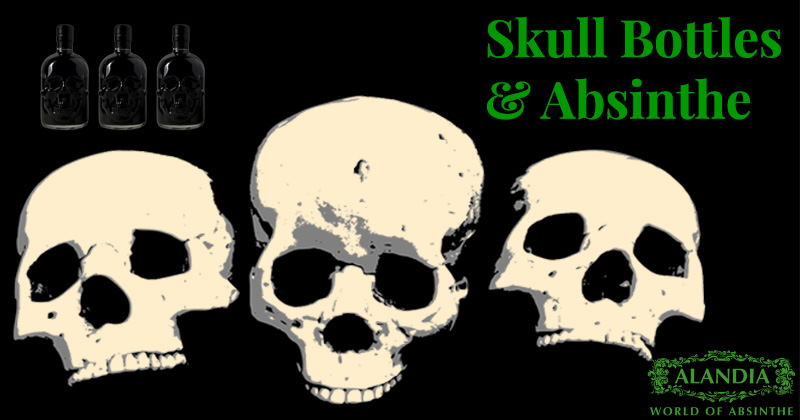 The Human Skull, a cultural phenomenon

Skulls are all around us. Be it the Mexican holiday, Day of the Dead, where skulls and sceletons are the main symbol, rocker gangs where skulls decorate the biker jacket, Shakespeare, where Hamlet looks into the face of an unearthed skull or Venetian painters of the 16th century that elaborated moral allegories for their patrons, also know as memento mori. Therefore it is not a surprise, that more and more products use skull bottles as their way of packaging. First and foremost to create awareness, but as well because of the cultural meaning of the skull. The skull gives the product instantly a mystical image. In the marketing world this technique is known as mimicry branding, a branding strategy wehre a well known cultural artefact is imitated to accelerate the brand building process.

But what’s the true story of the skull? Why does it fascinate people around the globe, most notably for centuries..?

Skulls and their meaning: An explanation

Skulls inherit a fascinating symbolism. But why is that? What’s the scientific explanation for it? We have investigated and can present you some interesting info. The human brain has a specific region for recognizing faces, and is so attuned to finding them that it can see faces in a few dots, lines or punctuation marks. Because of this, we see more in a skull than you might think: First and foremost, Death of course. We associate it logically with a skull. But we also associate life with it. Why? Because we subconsciously attribute it to the immanent face, that our brain helps to perceive. It is a fascinating subconscious perception that can explain why people around the globe are fascinated by skulls. You can test it yourself, look at the following artwork. The skull gives the picture an instant meaning, morbid charme combined with a sizzling aura of passion and love.

One of the best-known examples of skull symbolism occurs in Shakespeare’s Hamlet. For example where the title character recognizes the skull of an old friend: “Alas, poor Yorick! I knew him, Horatio; a fellow of infinite jest…” Hamlet is inspired to utter a bitter soliloquy of despair and rough ironic humor. At that time the skull was a symbol of melancholy. The gravedigger scene is as well very well known, where Hamlet thinks about the commonness of death and the vanity of life, while looking in the face of an unearthed skull saying “To be or not to be” is probably the most famous quote of the play.

Skull Liquor: From Vodka to Absinthe

Various liquors are bottled in skull bottles. One of the first products was Crystal Head Vodka. The vodka brand was invented and founded by actor Dan Aykroyd and hit the market in 2008. The vodka is made in Canada, seven times filtered, with the final 3 filtrations through Herkimer diamond crystals, which are actually a type of double-terminated quartz rather than diamond. But this filtration technique and the skull bottle gave the vodka its name.

Hamlet Absinthe takes reference to Shakespears famous play Hamlet. The quote “To be or not to be” expresses in easy and well known words what this Absinthe stands for. A super strong liquor with a merciless alcohol content of 69 percent alc. by vol (138 proof!) combined with grand wormwood (artemisia absinthium). The skull bottle looks extremely real, in a way perfect for a liquor with such a unique history full of myths, scandals and misconceptions.

Some years ago, ALANDIA also offered a green Absinthe that did not come in a glass skull bottle, but used the skull imagery for the label. Similar to the above shown artwork “All is Vanity” by A. Gilbert the skull is immanent in the curtains and gestures of the ladies in the scenery shown.

Skull bottles are perfect for Upcycling

We hope you enjoed our short Blog post absout Skull Bottles. last but not least we have a recommendation for you. Whether you decide to buy a bottle of Skull Vodka or Skull Absinthe, these bottles are perfect for upcycling, This means once you have finished them, you can use them as an extraordinary vinegar or oil dispenser!

Skully Greetings from the World of Absinthe,

2 thoughts on “Skull Bottles: From Absinthe to Vodka”