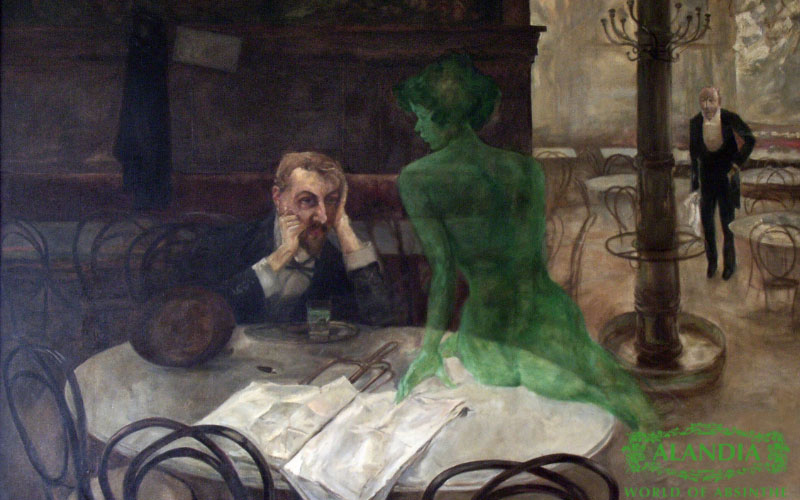 We are pleased to welcome you back to our Absinthe blog. We have often talked about it, and we still get many inquiries from customers about this topic. But we never went into too much detail. Today´s topic is therefore a very basic part of Absinthe. It is apparently also one of the reasons for the Absinthe Prohibition. By now you will probably already know. It is about Thujone and Absinthe.

Thujone: What it actually is

The substance has its name from its presence in the thuja oil. Thujone can be found in a variety of plants, especially in the white cedar and other conifer trees of the arbor vitae group. Actually it is as well a compound in many herbs, that you use as well in your kitchen. E.g. oregano, sage, mugwort, some juniper species and of course wormwood.

Absinthe & Thujone: What is the myth behind it?

Thujone as a compound was discovered after Absinthe became popular in the mid 19th century. Dr. Valentin Magnan, who studied alcoholism, tested pure wormwood oil on small animals (rats) and discovered effects, that finally resulted in the ban of Absinthe. He found out, that thujone caused seizures independent from the effects of alcohol. Based on this, Absinthe, which contains a small amount of wormwood oil, was assumed to be more dangerous than ordinary alcohol. A misconception, because pure wormwood oil is not Absinthe, and small animals are not human beings. One glass of Absinthe contains just very small amounts of thujone (10-35mg/liter, today and as well in the 19th century) and human beings have a different metabolism than rats.

Magnan went on to study 250 abusers of alcohol and noted that those who drank Absinthe had seizures and hallucinations. In light of modern evidence, these conclusions are more than questionable, as they were based on a poor understanding of other compounds and diseases. AND, this is very important to know, they were clouded by Magnan’s belief that alcohol and Absinthe were degenerating the French race. Therefore, he was obviously searching for evidence, no matter if it was valid…

After Absinthe was banned, research dropped off until the 1970s, when a British scientific journal published an article comparing the molecular shape of thujone to tetrahydrocannabinol (THC), the primary psychoactive substance found in cannabis. The researchers hypothesized thujone would act the same way on the brain as THC, sparking the myth that thujone was a cannabinoid. This was another misconception, later studies falsified the hypothesis.

Finally, is thujone (& Absinthe) poisonous or not?

Thujone, in very high doses, can be toxic. But we think all of you know that it is about the dose. Chewing too much sugar-free chewing gums can also cause diarrhoea. But this doesn’t mean that we stop consuming them. To put it in a nutshell, Absinthe is not poisonous. It is of course a high-proof liquor, therefore it should be consumed responsibly; just like any other alcoholic spirit like rum, vodka or whiskey.

Hopefully this post brought some light into the many myths surrounding Absinthe.

Nico from the ALANDIA Team